Solutions for our most pressing global issues come from unexpected places in a film that New York Times bestselling author Alicia Bay Laurel calls “beautiful … both art and documentary.”

A breathtaking journey through Japan, Korea, and the United States that turns our perceptions of food and life upside down in an amazingly simple and poetic way.

Inspired by the works of Masanobu Fukuoka, author of the seminal environmental book The One Straw Revolution, the film weaves together meditative landscapes, an eclectic original soundtrack, and inspiring stories from some of the world’s foremost figures in the natural farming movement. Together they give modern-day relevance to age-old ideas about food, environmentalism, and happiness.

GET THE FILM
HOST A SCREENING

“Wow!! A great film … both art and documentary.”
– Alicia Bay Laurel, author of “Living on the Earth”

“… a compelling direction for those seeking to unplug from the materially driven, resource-intensive global food system.”
– Natale Zappia, director of the Institute for Sustainability, California State University

“A film with a very big heart … the world needs such films now more than ever.”
– Brian Covert, journalist & lecturer at Doshisha University, Kyoto

“…a glimpse of the people and things which society can not ordinarily grasp… beautiful work.”
– Kim JaeHyung, Korean philosopher and activist

“The film filled me up with great joy and inspiration…I knew it was going to uplift and give a new perspective to my soul, but I didn’t know how deeply it would do those things! I’m going to watch the film today… for the 8th time.”
– Rafayah Uzzyah, Philadelphia, USA

WATCH THE FILM
HOST A SCREENING

The film has been recognized in magazines, newspapers, academic journals, by festivals, environmental organizations, and academic research collections, including…

Global Environmental Justice Collection
Final Straw: Food, Earth, Happiness was chosen as one of the initial 25 Global Environmental Justice films. Curated by professors from Yale, Brandeis, and Whittier College, this collection is now used in 100 universities throughout North America as part of their sustainability curriculum. It is the winner of the 2020 Buchanan Prize.

In the Media
A full list of media appearances is available on the In The Media page.

More Than a Film

Film directors Suhee and Patrick believe in inspiring new kinds of ecological awareness through natural farming, art, and purposeful community engagement. Since the start of touring for the film, they have engaged communities to imagine new ways of seeing, building bridges between where our society is now, and where each of us actually wants to be.

The directors have toured the film to over 150 cities, not only showing the film, but co-producing ecological conversations, arts exhibitions, urban gardens, sustainable culinary adventures, and urban nature workshops that compliment the film. These works have inspired thousands of participants in East Asia, North America, and Europe.

This work is continued today by the directors, through their City as Nature project, a creative urban ecology studio, based in Daejeon, Korea.

GET THE FILM
HOST A SCREENING

See the Film in Multiple Languages

You can watch the film through our distributor, Gumroad with subtitles in the following languages:

As always, 100% of the proceeds from this film go toward our current and future projects for fostering social and ecological well being.

In 2015-2016, the directors undertook a 110-date screening and event tour of Japan and Korea, to much celebration. This work included the piloting of a community-based restaurant and garden project called “REALtimeFOOD,” which gained considerable attention and has since been replicated and produced by multiple community and nonprofit organizations.

Today, the film’s grassroots popularity doesn’t seem to be slowing down. It’s been translated into seven languages (English, Korean, Japanese, French, Vietnamese, Chinese, Turkish, Polish, with others in progress) and continues to enjoy community screenings and events held regularly around the world.

The academic and environmental education world is also taking notice too. Final Straw: Food, Earth, Happiness was chosen as one of 25 films for the Buchanan award-winning Global Environmental Justice Collection, used in universities throughout North America.

Today, the directors continue their environmental advocacy work on a full time basis through their City as Nature art and media lab, and the opening of The Branch, an ecological activity space and natural garden in Osaka, Japan that hosts ongoing donation-based public workshops and exhibitions. Your film purchase supports this work directly, allowing us to produce more short films, workshops, talks, and other sustainability events that are available freely to the world.

We continue to work in close collaboration with natural farmers, and urban and rural sustainability experts in Japan, Korea, United States, and around the world.

About the Production Team

Four years in the making, the film’s Co-Directors Patrick Lydon (Silicon Valley) and Suhee Kang (Seoul, Korea) walked away from their salaried jobs to further ways of thinking, working, and living that might enable humanity to thrive together with this earth, instead of working against it.

From our first meeting in South Korea in 2011, our similar interests in sustainability issues lead us to conduct a joint interview with a noted author and natural farmer in the Korean countryside. A short few days with Mr. Seong Hyun Choi showed us the beginnings of what was possible when the connection between humans and the environment are the basis for how we grow our food.

It quickly became clear to us however, that Mr. Choi’s mindset was not really about how to grow food, it was about how to live on — and with — this earth.

Shortly after departing from Mr. Choi’s small, mist-covered mountain farm, we began seeing examples everywhere, of how such a connected mindset could transform the way we live, both on and off the farm. It rocked our perception of the world so deeply that we dove in, spending the next three years researching, working, and filming on these kinds of farms all over Korea, Japan, and the United States.

To us, this is more than just a documentary film. In addition to producing and touring the film in over 120 cities, we have reached out to audiences, creating cross-discipline discussions, producing exhibitions and festivals, workshops, and events that use art and ecology as a bridge for understanding and connecting. During this time, we have conducted large amounts of research, not only in libraries and academic centers, but firsthand, person-to-person, both within some of the largest cities, and smallest communities in the world.

It’s hard for some to comprehend that the Final Straw film and events have thus far been created on a shoestring budget by two people with a camera and determination… and then you realize that it took directors Patrick Lydon and Suhee Kang four years, their entire life savings, and the help of a global cast of volunteer translators, coordinators, and musicians to get it done. It’s not always been easy, but in truth, it’s been like riding on a wave; an inspiring path filled with support from others, and with so much excitement for these ideas and how they can move us towards a truly equal and sustainable society.

We’re still at the very beginning of what we can (and need to) accomplish too, we’re hopeful that you’ll join us for the journey!

Patrick is an internationally exhibited artist and writer working across multiple disciplines to ignite unconventional dialogues on humanity’s relationship with the natural world. He has lead projects involving diverse casts of people; from farmers, to city planners, to artists, rural and urban community organizations, and educational institutions. In addition, he is the founding editor of SocieCity collective, and the arts and events editor for The Nature of Cities. Patrick holds an MFA with distinction from the University of Edinburgh (Scotland) and previously studied at San Jose State University (USA) and Aichi University of the Arts (Japan).

Suhee is a photographer and social and ecological activist. She has worked as an Editor of books on ecology and sociology topics, and has served as a volunteer for many like-minded organizations including the ‘Dumulmeori’ organic farming struggle, and ‘Rogpa’ organization for Tibetan refugees. Suhee has traveled throughout the Middle-East, Europe and Asia to engage with the traditional way of living, for which she won the grand prize in the traveling photography contest by Istanbul Cultural Center. Solo and group shows of Suhee’s work have taken place in Seoul, Kwangju, and Yangpyeong. Suhee graduated from Sungkyunkwan University in 2007 with a degree in Journalism.

Kaori is a food therapist, project leader, and board member for the NPO organization Touch in Peace. She is the lead translator and project manager for Final Straw’s projects and activities in Japan. Kaori worked internationally with food and massage therapy as tools for bringing about health and well being to communities and the environment. Her menus are often improvised as she concentrates on local, natural foods in tune with the season and with the constitutions of the guests. Kaori also works with Kobe city for their seasonal Farmer’s Market as translator and producer of a CSA empowering workshop.  Her works are becoming more like that of a social activist these years, and she expects to produce a “Pay it forward” based conceptual restaurant that will open seasonally next year. Kaori studied at Kobe University of Commerce(JP).

“A Little Light” by Heeyoung Park

The Final Straw: Food, Earth, Happiness film is introduced with a delicate and moving animated short by Heeyoung Park. The animation is hand drawn, and took two years to complete.

The process was intense and immersive; in order to prepare for drawing the first frame, Heeyoung spent an entire year studying with the directors, going over ideas and sketches, and working on natural farms. Heeyoung also chose to work specifically with Japanese composer ZMI to create the soundtrack for her short.

The result is a deeply personal and introspective work of animation.

A Soundtrack from Three Countries

As our primary filming took place in Japan, South Korea, and the United States, we wished to work with musicians from these three countries as well. Having studied music (flute) since childhood, Lydon undertook the job of working with professional musicians to create a soundtrack that reflected the depth and meaning of the film. All musicians volunteered their time to support the film. These musicians are impressive not only musically, but in the mindset of how they make and share their work. The musicians are:

Wind Sync | United States | Houston, Texas | windsync.org
Much of the soundtrack is improvised by this group, a revolutionary wind quintet who are internationally recognized for their dramatic and engaging performances. These five virtuoso players tour regularly, inspiring audiences of all ages.

This project — both the documentary and our outreach — would not be possible without the continuing generosity of amazing people and organizations who we constantly encounter along the journey. We would like to send a huge thank you to those who have helped support the Final Straw project to date, including:

Individuals we are currently engaged in who help produce, manage, and otherwise make our projects come to life. 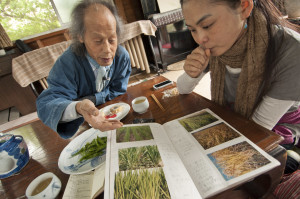 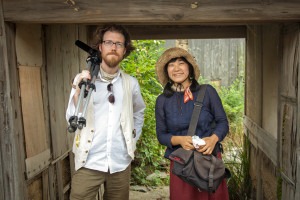 4 thoughts on “The Documentary”