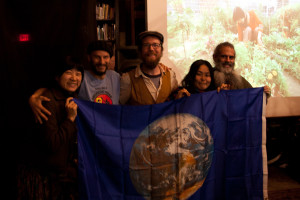 Last week during a screening event at PLACE for Sustainable Living in Oakland, California, we were suddenly approached by an audience member during the Q+A. This local community activist, Pancho Ramos, jumped from his seat, handed us a big flag, and gave us hugs. He couldn’t speak — on Mondays he takes a vow of silence — but he motioned to us and everyone in the room, and drew a big circle in the air with his hands, for on the flag was an image of Earth.

We all smiled and laughed, thinking “Yes! Of course. We are all part of this Earth family. This is our flag!” A few days later, this flag with the image of Earth on it also had me think about other flags and their meanings; flags of state, nation, of religion, of war.

The national flag is a symbol of pride, of oneness within borders, and of triumph against forces outside of these borders. In America we treat the flag with great respect. In the morning at government institutions around the country, we hoist it up a pole for all to see, and then as the day ends we take it down from its post, fold it carefully into a neat triangle, and repeat the process as dawn comes the next day. The flag should never touch the ground. If it becomes worn, it should be carefully, respectfully burned in ceremony.

The flag is a big thing here. It is a symbol of all that we stand for. It gives us us an identity, and in theory we welcome others to share in that identity.

American President Woodrow Wilson once said “Let all men who want to be free come to us and they will be welcome.” President Wilson might not have realized at the time how his proclamation would become an impossibility in later decades, or how a mindset of alienation and exploitation to all that rests outside our borders would become so intensely pronounced.

However honorable the intentions, as soon as such national borders are drawn in our minds, these unique creations of the human imagination inevitably end up solidifying into psychological, and then physical walls which distance us from our human brothers and sisters.

While at once a symbol of pride, the national flag can become a tool of supremacy and separation from our kin. Could we unite instead, behind an “Earth” flag?

In giving us an identity then, the national flag also creates artificial borders, artificial categories of people, and an artificially-limited homogeneity. You can be here, but they can’t. You are one of us, but they aren’t. There is really no reasoning for this, except that you are born here, and they were born there. In a very real and tangible way, the national flag serves to isolate the people of one nation from the rest of their human family.

A flag, while at once a symbol of pride, oneness, and triumph, can also become a tool of artificial supremacy, of separation from our kin, and of unnecessary strife and conflict within this Earth. We often like to call this the “reality” of our times, but this begs us to ask whether or not we are defining reality in a realistic way.

In the reality of this earth, national borders drawn on maps have little ‘real’ weight.

In the reality of this nature, there are no borders that separate one people from another save for those we create in our own minds.

In the reality of this humanity, we are one human family and this earth is our home, our pride, our sustenance, our mother.

That is why this flag from Pancho, with an image of our planet Earth, is such a remarkable gift to be given. The flag of the Earth is a flag we can all relate to, for the reality of our physical, spiritual, and biological position in this universe is that we all belong to this Earth, are all nourished by this Earth, and are all indebted to Earth’s qualities for sustaining our lives each moment of each day.

Perhaps today’s Woodrow Wilson, a person realizing the limitations of our national borders, might say to us “Let all human beings who want to be free unite under the flag of this Earth, and let them create the conditions for freedom and equality through compassion towards all beings on this Earth.”

Thank you, Pancho, for your gift, and for all that you do to build harmony, community, and well being in those around you. I hope one day, that we can fly Earth flags across all cultures with pride, with love, and with peace in our hearts, minds, and actions.